today I will have a look at Beasts & Barbarians, a Sword and Sorcery Supplement for Savage Worlds by Gramel Publishing. I want to find out if it is as good as word on the street says. So follow me on a journey into a dangerous and wretched place full of dark secrets and mighty heroes.

Beasts and Barbarians is a 76 pages PDF file. The usual layer options are present and it is fully bookmarked. I have the habit of scanning the table of contents of any new RPG book I buy to get an overview of the contents and to check if there is something that stand out as interesting to me. However there is no table of contents here. The book starts with the introduction to the setting. A quick flip through reveals the table of contents is at the end of the book, after the index on the last few pages. An odd layout choice that I first found weird but got used to. If you read it at the screen it does even matter less.

The books artwork is of varying quality from very good to mediocre, while the good is definitely in the majority. Do not let the cover image fool you! Gramel is working on a replacement. The layout is nothing extraordinary but works well.

Beasts and Barbarians opens to a short welcome note on the first page, proudly proclaiming some of the features of this setting book:

-A simple but elegant system to develop your characters between sessions and to manage their wealth.

And of course more!

On the opposite side is a full-page map of the setting area, the Dread Sea Dominions. The Map is hand drawn and has many little details that already bring the setting to life and evoke several adventure hooks simply by small images of statues or monsters.

After a short introduction to the setting the Book of Lore Chapter begins. These 25 Pages hold everything you need to know about the Setting. At first it explores the history of the area and explains how the dread sea got its name. They also describe how the current countries and borders formed. There is a lot happening and one thing is certain after reading it: The place has a dark, twisted and violent history. The timeline begins with the destruction of an ancient empire, ends with its successors in decline, and covers about 2500 years. It is a detailed timeline and almost too much so for my taste.

The next section introduces the inhabitants of the Dread Sea Dominion with a bit more detail. Each of the seven described cultures is unique and none feel superfluous. Every Culture is a more or less fictitious version of an ancient, real world culture. You immediately have a strong visual image and can at least rudimentary imagine how to play a certain culture. See the picture below for the illustrations. 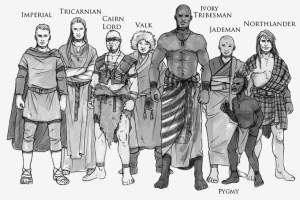 There are two more cultures: The Caleds, wood dwellers with powerful druids, and Pigmies. They are not meant for player characters and are subject of further publications.

The descriptions are very interesting, there are no statistics or modifiers for the cultures however. I prefer some modifiers through culture, like favored skills or similar small tweaks that satisfy the number crunchers and differentiates cultures in-game besides roleplaying. Right now race is only a cosmetic choice.

The following part in the Book of Lore chapter describes the overall way of life. It is a short summary of the technology available, the spoken languages, and practiced religions. It is a short section but again enough to give you a good idea of the current life in this world.

After a short text about the dominant climates in the Dread Sea Dominions the gazetteer begins. The descriptions of the various lands are short but evocative. Each ends with a special note. A place, tradition or event from the area, something that adds flavor and works as a plot hook at the same time. This is a very nice touch. The described landscapes are varied and range from the frozen mountains in the north through fertile farmland, savanna, and desert to steaming jungles in the south. There is enough area to explore and to recreate every possible classic Sword and Sorcery adventure. It is easy to inject the areas with a life of your own design too as the descriptions leave a lot of room for a GM to fill with his own ideas.

One thing that is missing from all descriptions is scale and distance. Even the world map has none. The designer explained on the pinnacle Forums that this is on purpose. For one the map is supposedly drawn by an NPC Explorer we will hear more about in future releases. And it allows the GM to scale the world as he needs it for his campaign.

With the gazetteer the background information for the setting is complete and the sections on game mechanics begin.

They start off by listing several Heroic Concepts, short descriptions that  give you an idea about the kind of heroes that travel the Dread Sea Dominion. They read as you would expect for a Sword & Sorcery setting and contain every major archetype of the genre, no surprises there.  Sadly they did not take the SWD approach and did not actually stat up these archetypes .  It would have been a great starting point for player characters and NPCs alike.

Character creation follows the Savage Worlds Deluxe rules and there are no new skills in this setting. There are 4 new hindrances however. They  all are fitting for the background. Several edges are modified,  some rather heavily. For example the Ace edge now includes riding instead of piloting and is split in three separate edges, one for each affected skill.

While reading through the edges I realized the writer understated the numbers of new edges in his opening words. There are even more than stated: 33 + 3 Arcane backgrounds, not 30. This sounds like a lot of new edges, but if you break them down into the categories it is much more reasonable: 7 background edges, 7 combat edges, 7 power edges, 9 professional edges and 3 weird edges. As far as I can tell they did not duplicate already existing edges but rather created new and interesting choices.

The background edges fit the setting really well and tie in neatly with the cultures and history.  Combat edges give us new abilities fitting for such a barbaric world. The most iconic one is the “Loincloth Hero/Bikini Heroine” Edge. It is an interesting take on the naked warrior problem by giving the character free soak rolls. It sounds a bit too powerful on paper but it is hard to tell without a play test. All power edges are of course linked to the new Arcane Backgrounds. The Gramel designers also created some really interesting professional edges that mesh neatly with the background. Even the weird edges are useful throughout.

The next chapter covers the Magic of the setting. As advertised there are three new arcane backgrounds: Lotusmastery, Sorcery, and Path of Enlightenment.

A Lotusmaster is an alchemist who creates concoctions out of the various deadly lotus plants that bind the specific powers in powders or potions.

The art of sorcery is truly dangerous to the user and can leave him permanently scarred.

The path of Enlightenment is the only AB that does not have access to any offensive spells. A character with this arcane background does not cast spells in the usual sense but is more of a shaolin monk. His powers are special abilities and extraordinary moves.

For these new backgrounds there are 4 new powers available. Each one is useful in itself and they seem in line with the core powers. All in all the Magic is very Sword and Sorcerish, with a hint of danger or secrecy. I really like their approach to the Lotus master, it is an interesting alchemy variant. There are very stylish example trappings for each AB that are a very good starting point to create your own.

After Magic comes the chapter for the more mundane things : Weapons, Armor, Items, Animals etc. Everything a fledgling adventurer needs to survive this dangerous world. There are weapons and armors for everything you could need. Interestingly they grouped the armor simply into light/medium/heavy without describing specific armors. Not sure I like that as it lacks flavor. That is not an issue with the weapons, the list is full of new and culture specific toys. I like that listing a lot, it is comprehensive without being bloated.

Next up: Setting rules. There aren´t many. But what is there is interesting, like “Savings” and the “After Adventure Events”. The Saving rules basically explain how the characters never have much money as they usually spend or lose it all between adventures. Do not worry if the characters find a huge statue of massive gold. They still wont have enough in a few days time. Tying in with the “Savings”  rule is the “After the Adventure Event Table”.  A player can draw a card between adventures to find out what their characters where up to. There are good and bad things in it and the result usually leaves the character with a temporary effect, hindrance, or edge for the next adventure. It is a clever addition and can help inspire interim stories and even small plot hooks.

Finally we have reached the Game Master Appendix. This section has some quick tips on how to GM the game and some examples on challenging the players besides combat. It also has information on how to play campaigns with different group sizes and how to tweak the setting to your liking.  The most hilarious Combat edge I have read so far is also found here: Barbarian Belch (Combat Edge). It  is part of a paragraph about humorous games, the first time I see such a section in a setting book. The tips are helpful but nothing groundbreaking. It is interesting to note how adaptable this setting is.

The GM section also includes a list of 20 Relics for your players to find. Some evil and some powerful and most of them interesting but not necessary harmless. The list is a good start to build your own relics and enough to get your game started.

Finally there is a short monster primer. with only 11 Monsters this is not a huge list but a varied one.  It gives a great first impression of the dangers the characters will encounter in the future. Together with the SWD there is enough here to start a campaign.

I like Beats and Barbarians. The history, culture and land descriptions are comprehensive enough, so you can just pick up and play in the Dread Sea Dominion.  Most of this setting is immediately familiar and seems almost generic in its nature. The Dread Sea is vague enough so I can project my own ideas into it and does not suffocate me in details.  That is the way I prefer my source books. The genericness is one of it`s strength and makes the book a good resource for your own Sword and Sorcery Campaign. But as I stated at several points during my review there are areas where they missed opportunities to make it even more comprehensive.

At the current price of 6,99 USD it is good purchase. Gramel also seems  committed to Beasts and Barbarians and stated they aim for regular new releases. There area already two free adventures available to get you started right away. You can find these and other free goodies at their homepage for Beasts and Barbarians. I was hesitant to buy it at first but overall I am glad I did. Will you pick up this PDF? What is your opinion on the setting?

Welcome to the Chaosmeister Games website. I hope you find my articles and games useful and entertaining. Would love to hear from you either way!